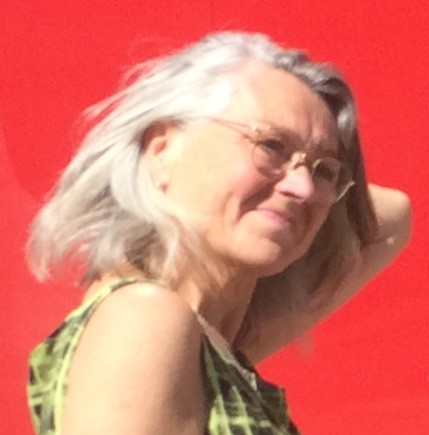 She worked at Studio Angelo Mangiarotti in Milan in '83-'84. In 1985 she moved to Amsterdam, where she worked for several years for the architect Borek Sipek as studio assistant, for Studio Dante Benini & Ingex, Milan as translator for the design and realisation of the EuroCetus Headquarters in Amsterdam and for Laboratorio Morseletto Vicenza as translator and organiser on building sites, e.g. the refurbishment of the Jolly Hotel Carlton, Amsterdam.

She teaches applied arts and architectural design at the Gerrit Rietveld Academie in Amsterdam since 1991, at the KABK The Hague in '92-'93 and at PERK Eindhoven since 2006. Since 1991 she has been ongoing developing, updating and fine-tuning programmes for vocational design education on various levels in the professional field.

2012-2019 she has taken place in the Participation Council (Medezeggenschapsraad) of the Gerrit Rietveld Academie, in Academie Artemis Denktank 2020, a think tank on design- and styling education strategies 2014, and as chair of the exam committee (examencommissie) 2018-2020.

In her educational practice she has organised several student exhibitions, e.g. 'Dix-neuf poèmes élastiques - Cendrars and Cocteau travelling' (2004) at Maison Descartes, Amsterdam and 'IN/OUT of Public Space' (2004) at the VU Exposorium with the LAPS (Lectoraat Art in Public Space).

In addition to a collection of terrazzo alla Veneziana compositions at Flli. Candido, Amsterdam, she developed and patented the 'Portadance' floor, a portable modular outdoor dancefloor for hardshoe dance (tap-, flamenco).

Issues of scarcity, social- and behavioural aspects in spatial design and facilities are ongoing topics of research.

Currently she is involved as a team member on behalf of the Rietveldacademie putting together a Conservation Management Plan (CMP) for the original academy building (1967) of the Gerrit Rietveldacademie, which has been enabled by a grant of the Getty Foundation from the 'Keeping It Modern 2020' programme.